How to throw a spectacular 1970’s party 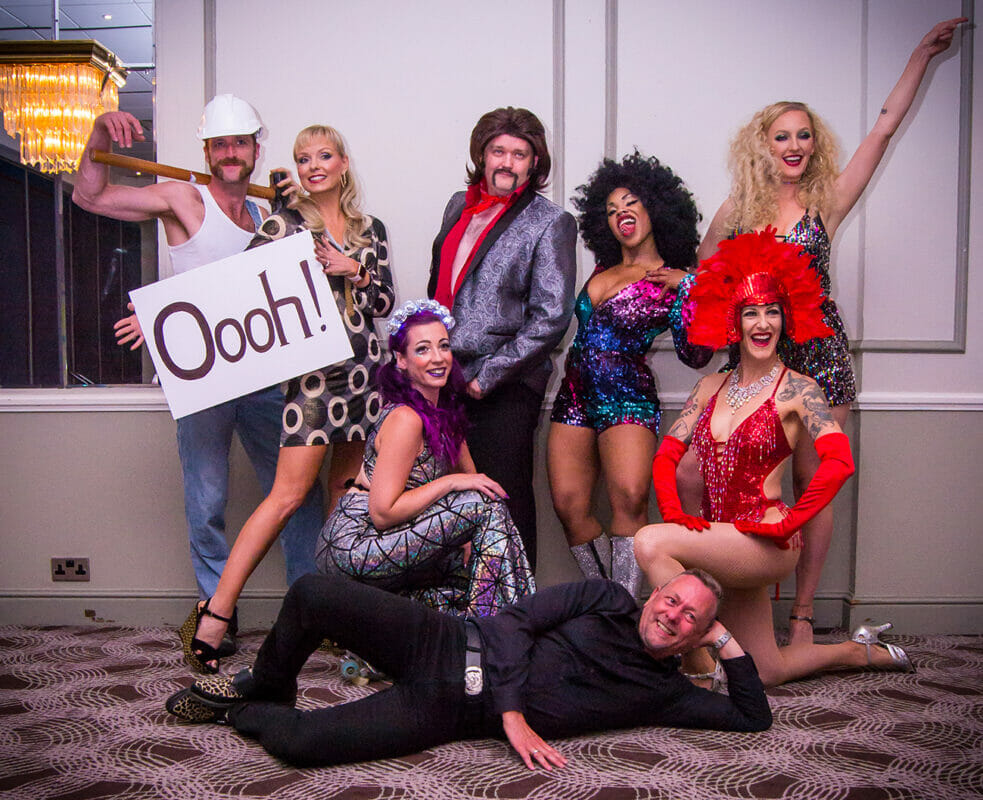 With ABBA talking about a comeback, Disco influenced music in the dance charts, 1970’s party style fashion in the shops it’s time to ride the 70’s train! What better time to throw a 1970’s party with live entertainment. We did a huge amount of research when looking into how to throw a spectacular 1970’s party. Our Electric Cabaret 1970’s Revue is a comedy take on what we thought was super chic back in the decade that style forgot.

We previewed the night at Brighton Festival Fringe to a sell-out audience. We had such a great response that we are now booking the show for both private and corporate events.

Here are some pointers regarding what we found useful when putting together our 1970’s event.

Research For Your 1970’s Party

So let’s talk how to throw a spectacular ‘70’s party with live entertainment. Firstly research is very important. Everyone thinks they know an era well but research into the long lost slang we used for dialogue for the show will make it authentic. The items we had at home, how much things cost, what we watched on TV, news stories and scandals of the decade, crazy fads and fashion can be a goldmine of creativity. Google is your friend so search away. Getting those 1970’s party comedy references right will heighten nostalgia and really lift your event.

Dressing your performers in cheap, hackneyed fancy dress won’t cut it either. Plunder Ebay and second-hand shops for retro clothing. Research hairstyles of the era, because again bad wigs don’t look great on stage. Use curling tongs to created the classic flicked Charlie’s Angels styles. Ask male members of your cast if they can grow a beard prior to the show and then shave it to make a big handlebar moustache backstage. Much easier than a notoriously difficult stick on version.

The same rules apply to props and dressing your stage. You don’t have to spend a fortune as luckily the 1970s were a very handmade decor affair with cheap and nasty glitter curtains, lava lamps, truly shocking patterned walls and of course a lovely glitter ball!

Projections of fashionable images from the time are also a great way to cover the walls of a venue if your area is a relatively blank canvas. If there is a bar at your venue it’s also a fun idea to have some retro cocktails on the menu complete with naff cocktail umbrellas in the glass.

There is an absolute wealth of performance ideas that can be created from the era. Disco, punk, keep fit fads, movies, advertising and TV were all so wacky and outrageous in this era that performers can bring a 1970’s flavour to existing skills.

Fire performers can create disco inferno acts by adding new choreography and costume. Dancers can bust out some of those Saturday Night Fever moves or Keep Fit choreography with Jane Fonda.

Djs can talk on the mic in the most cheesy way imaginable. Hosts and singers can choose from so many iconic songs from the decade. There seem to be an extraordinary amount of sugary male/female love song duets during the decade which are perfect for a comedy send up.

It would, of course, be a missed opportunity for your host not to be involved in several costume changes. Each getting more and more outrageous as the night progresses. Bear in mind that your host or hostess may need a wardrobe assistant to help with quick changes backstage.

The Electric Cabaret 1970’s Revue is our flagship 1970’s party event. We utilised all of the above research when putting our show together.

What happens on the night

Guests are invited to time travel back to the decade that style forgot. Fancy dress is highly encouraged.

Our gorgeous disco diva hostess is dressed up to the nines in the fashions of the day. She guides us through the decade with belting songs and hilarious comedy interaction with the audience.

We introduce you to TV’s top light entertainer Bob Baxter. Bob is the king of innuendo with his cringe-worthy 1970’s game show ‘Bob’s Bouncy Balls’. His long-suffering showgirls demonstrate a wide variety of truly awful 1970’s prizes that the lucky contestants can win while avoiding Bob’s wandering hands!

Our Studio 54 dance floor darling performs an outrageous disco routine with all the hedonism of the famous New York discotheque.

For our homage to punk rock our Mohican and leather glad dancer body burns and angle grinds across metal plates strapped to her body in true anarchic style.

Roller girl whips up a storm with her super cute Roller-skate tricks and stunts.

Excessive Elvis eats his way through the song ‘Burning Love’. He has a case of serious heartburn and constant take away deliveries by showgirls.

Disco inferno hits the stage with a fire act involving blazing hula hoops. We finish with a great big, colourful disco finale of course followed by disco dancing to the very best dance floor classics until the small hours.

Now that’s how to throw a spectacular 1970’s party with the very best live entertainment!

It is complete with artwork and comedy teaser campaigns for your social media invites or advertising.

Contact us for a chat and a quote. Get ready to don those platforms and step back in time with the Electric Cabaret Company.